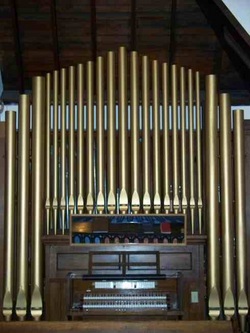 The Pipe Organ
The four rank Pilcher organ, Opus 969, was built in Louisville, Kentucky and installed in December 1917. It has been in continuous use since.  The manual has 61 pipes each of:  8' Open Diapason, 8' Dulciana, 8' Stopped Diapason, and 4' Flute Harmonic.  The pedal has twelve 16' Bourdon pipes, with the rest of the pedal notes borrowed from the Stopped Diapason.  The organ was built with tubular pneumatic action put in organs between 1901 and 1925, a transition between mechanical action and the electro-pneumatic actions that followed.

In 1998, there was a major campaign undertaken to renovate the organ and much needed work was accomplished.  In 2004, all 256 pipes were removed, cleaned, repaired and revoiced.  It is one of three working pipe organs in Middlesboro; the other two are located at First Presbyterian Church and First Christian Church.